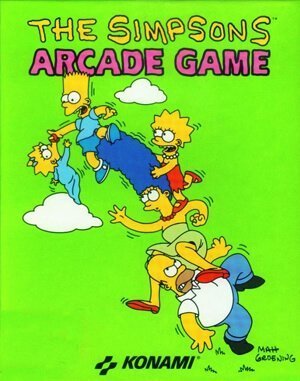 Click here to play The Simpsons Arcade Game online
4.3 /5
The Simpsons are walking in the street when Smithers, who stole a diamond from a Jewel Shop for Mr. Burns, accidentally bumps into Homer. This sends the diamond flying and landing in Maggie's mouth. Smithers kidnaps Maggie and runs off with the diamond in her mouth, prompting the Simpsons to pursue him and attempt to rescue Maggie.

Waylon Smithers has just stolen a diamond from Springfield Jewelers for Mr. Burns. While trying to make a getaway, he crashes into Homer, which knocks the diamond out of his hand. Maggie catches it in her mouth, prompting Smithers to grab her and run off. The Simpsons decide to go after him, but Mr. Burns has tons of henchmen, who want to prevent the family getting their daughter back.

The Simpsons is basically a side-scrolling beat-em-up featuring the characters from The Simpsons TV show. The player can choose to play as each of the four Simpson characters. Homer, who punches and kicks; Marge, who swings her vacuum cleaner; Bart, who wields his skateboard; and Lisa, who uses a jump rope as a whip. Other weapons such as hammers and bowling balls are also available to use. The game’s levels are Downtown Springfield, Krustyland, Springfield Discount Cemetery, Moe’s Tavern, Springfield Gorge, Dreamland, the Channel 6 studio, and the Power Plant. Each level ends with a boss whose speed and strength will increase after taking a certain amount of damage.

End level bosses are the wrestler Professor Werner von Brawn, a hot air balloon shaped like Krusty the Clown, a pair of bouncers, a drunk at Moe’s Tavern, a henchman in a bear suit, an imaginary, gigantic bowling ball, and a martial arts sensei dressed like a kabuki actor. There’s also the showdown finale against Smithers and Mr. Burns in a robotic outfit.

Between levels, the player can compete against the other characters in two mini-games to be first to complete a task (inflating a ballon and waking up their character).

You can play The Simpsons Arcade Game online here, in web browser for free!

ZorkQuest: The Crystal of Doom