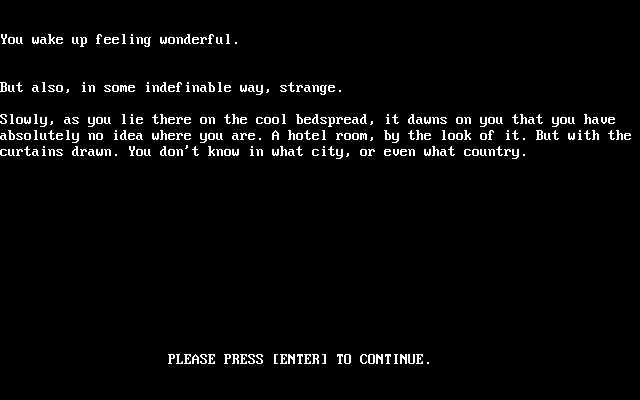 A DOS game was developed by Electronic Arts and then released by Cognetics in 1986, the game was called Thomas M. Disch's Amnesia. Now you can relive the memories by playing it online here.

Fully text adventure, is deservedly considered one of the most elaborated, massive and complex games in your direction or even genre.

On the protagonist of the game nothing is known - not only to you but to himself. The hero just wakes up in the morning in a luxurious hotel room with drawn curtains and discovers that couldn't remember even her own name, and that he had no money, nor even clothing. In fact, this starts the game; if you manage to somehow get out of the hotel (with no clothes), you will learn that the action takes place in Manhattan (NY, USA), and you hunt assassins, and we don't know why (yet, of course), but it has something to do with the murders in Texas. Task - first, to find out who you are and what happened, secondly to survive. That is kind of - it is a survival simulator in like usual, but suddenly find themselves utterly extreme conditions.

In fact, the game is surprisingly well made and is able to tighten, despite the fact that, first, all of it is white letters on a black screen, and secondly - it is quite complex (and the fact that you need to know English language in and of itself). During your hunt and can easily kill if you do something wrong. Descriptions of the locations in which you are extremely detailed and accurate, but to succeed in the game, they are not enough. In addition, unlike many text quests, in Amnesia you have a complex points system along the passage, dividing immediately into three categories: detective (increases after the actions of the inspection of the premises), character (increase after, for example, conversations with people) and survival (increase from any "positive" action of a physical nature - starting with getting out of bed early in the game). Control is by keyboard input various commands (the game understands more than a thousand words - a good idea at the time); in particular, the Status command will allow you to see the number of points in all categories, and will also show your health status, current location, existing objects in their possession and the amount of money and time.

Because, surprisingly, largely Amnesia - it's not even a quest, namely, that survival simulator amnesiac man in a giant, and is full of danger and horror city - horror, which you will not see, but it is even worse; a whole world hidden behind the lines of the letters. Of course, there are the already mentioned NPC dialogue, will search for items and use them, are typically the quest of the riddle - but will also, say, the need to buy food or medications, and from making money on them; it will be tracking the time of day in order to get to some shop or just a place to sleep, because sleeping on the street to anything good will not. Time is a very important part of the game, because few choose the correct answer in the dialogue or to find the desired object: at least often need time to come to some location. Despite the lack of graphics, the world of the Big Apple is huge: you will actually be able to visit almost all of Manhattan, each building (thousand), each street (hundreds) or the metro station! For successful orientation in the city is designed extensive documentation, marching in the kit with the game, for example, without a special indicator with numbered streets, you almost certainly get lost.

In short, in many ways, this thing is brilliant and unique, especially if you add to the above that its passage is not quite linear and allows us to solve certain situations in different ways. However, it is intended only for very serious development and only the most "hardcore" players who will not be afraid of all these difficulties. The main thing - not to fall into oblivion and not be too random...