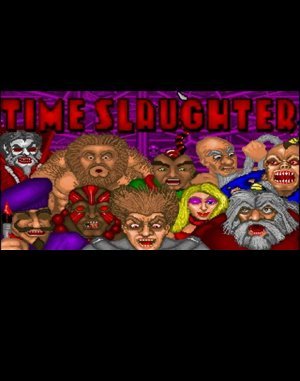 Click here to play Time Slaughter online
5.0 /5
A scientist makes a time machine, and some demons who don't like people messing with time come in and chop him up. He manages to send them away and replaces his missing parts with machinery, becoming the cyborg known as Portal. Then he summons warriors from across time to do... to do... I don't think they ever say.

This fighting game follows the traditional approach; select your character, fight each opponent for the best out of 3 rounds, and work through a hierarchy of opponents. The fighting is done with punching, kicking, jumping and specialty moves unique to each available character. The player has 10 characters to choose from, 3 types of punching, 3 types of kicking, 4-5 specialty moves, and finally 1 ‘slaughter move’. Play Time Slaughter online!

William Spade is an inventor that has created a ‘time portal generator’. Somehow this device is sacrilegious to a race of creatures known as the Takar, and they demand it be turned over to them. Refusing to comply, he manages to vanquish these creatures from his lab, but not before losing vital body parts. He rebuilds his body and becomes the insane monster known as Portal.

Warning: this game is not recommended for those easily offended.