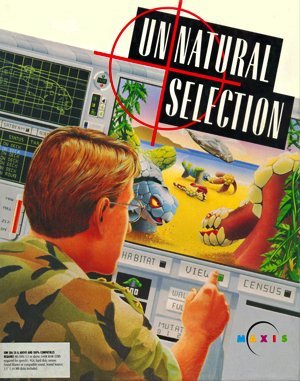 An evil scientist has used genetic engineering to create a race of rampaging monsters. As a fellow scientist you must take back a chain of islands by breeding your own creatures that are faster, smarter, more aggressive, and faster at breeding. Raise your creatures in a lab where you can mate them, examine them, and even create random mutations by introducing radiation into the environment.

The game has two phases, the first is the breeding phase in which in the player uses various objects and methods (food, drugs, radiation) etc to breed the animals which will fight future battles. The second is the battle phase in which the animals are deployed on the battlefield in order to combat those of a rogue scientist.

You can play Unnatural Selection online here, in web browser for free!

Heroes of the Lance