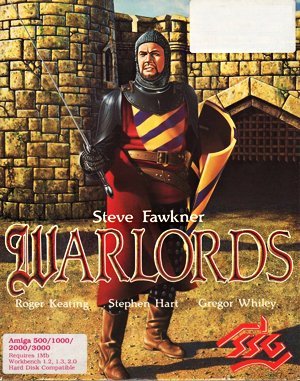 Click here to play Warlords online
5.0 /5
The games are set in the fantasy world of Etheria, and tend to be based around the traditional premise of good versus evil, with neutrality in between. Heroes on the side of good are the Sirian Knights, the mercantile Empires of Men, the elves and the dwarves. On the side of evil are the demonic horsemen: the Lord of Plague, the Lord of Famine, the Lord of War, and the ever present Lord Bane, Lord of Death.

The first Warlords was created in 1990 by Steven Fawkner, and published by SSG. It featured 8 different clans battling for the control of a mythical land called Illuria: Sirians (white), Storm Giants (yellow), Grey Dwarves (orange), Orcs of Kor (red), Elvallie (green), Horse Lords (light blue), Selentines (dark blue) and Lord Bane (black), which could either be played partly by the computer or by eight different people taking turns in what is known as hot seat play. Play Warlords online!

The first in the Warlords series. Basically, your mission is world domination. This may be played between up to 8 people all on the same machine. It is a medieval type strategy game that requires the player to control 80 cities in the realm of Illuria. In order to do so you must wipe out your 7 opponents.

Gold is accrued through the ownership of cities. The gold is then used to create armies. Heroes can sometimes “find” things or be rewarded by sages (there are only 2 and it’s a first come first served basis). You can choose between various human and non-human peoples, as well as the ubiquitous evil Warlord. This is a very early version of what strategy games eventually became.

Gameplay consisted of moving units, checking and adjusting production in cities and moving heroes to explore ruins, temples and libraries, and discover allies, relics and other items. The goal of this game was to rule the land of Illuria by defeating the other 7 opponents and capturing or razing at least two thirds of the cities in the land (initially 80, but cities could be razed upon capture). The winning player could show no mercy to his opponents, in which case the battle went on until one side won all the remaining cities.

Players would have to make (informal) alliances and adjust their production to react to various occurrences in the game. Many of the cities in the game are references to the works of J. R. R. Tolkien and other fantasy writers.

Warlords leaves its legacy as one of the progenitors of the strategy and turn-based game market. As games sometimes took many hours to complete, many players are able to recount marathon sessions of playing the game.

You can play Warlords online here, in web browser for free!