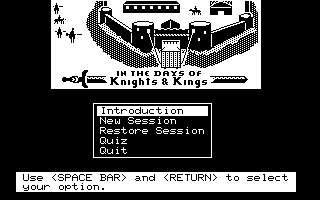 In the Days of Knights & Kings, a top-notch Educational game was developed by Entrex Software Inc. in the year 1989. This was a very famous and in-demand DOS game. You can play it online here again.

In the Days of Knights & Kings description

A rare and interesting turn-based strategy with elements of adventure and RPG dedicated to all "undeveloped" game developers page of history: the invasion of the Normans under the leadership of William the Conqueror to England in the XI century, which, as we know, ended with the battle of Hastings in 1066, the death of king Harold and the Norman conquest of England. But in this game you have the opportunity to prevent it – because you are playing for Anglo-Saxons!

What exactly is unique about this game? First, the way of victory. To win, of course, and you can, and your opponent is William, but for him to win will have to try a lot more than you. England in the game presented in the form of divided fiefdoms of the country (partly true, of course), you win the game you must collect sixty "s point", which can only capture cities and collect taxes from them or to kill William anyway. And he, poor fellow, you need to collect thirty "s the point", but also (not "or"!) access to London and kill your protagonist Harold (in this case it will be "crowned").

The second interesting point – the answers to the questions at the beginning of each turn. The questions relate to the English history of that period (have you seen?). It's not copy protection, don't be afraid, the answers given, something is possible even to guess; if you answer incorrectly, the game continues, but you in this case, how would "pass" the course, that is not for him to do anything. In practice it is fraught with very bad consequences, so the game is a unique and fascinating stimulus to the study of the history of the brethren of the English people...

A big part of the gameplay, as already mentioned, strategy, and military Affairs totally dominate over economic ones. Our most important task is to move troops around the country and to take the city by storm. But there is also the possibility to use spies (their action spectrum is very wide) and move to the country of king Harold – also with different purposes: to hide from William or, for example, to call men into the army (but this is possible only if the city supports us).

Graphically, the game looks nice, although mostly dark, many of the details, of course, conditional, but the graphics for this genre are not especially important. The atmosphere is thick, very clearly perceived – is in the right place, and this is important. All fans old and little-known turn-based strategy (as well as real connoisseurs of history) – a strict recommendation, fun guaranteed.

Want to play In the Days of Knights & Kings online now, play it on your browser here.