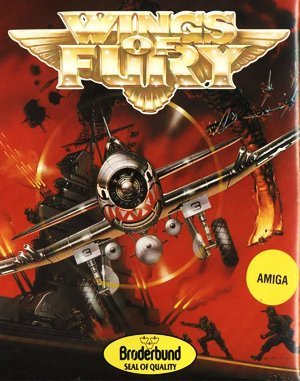 Wings of Fury is an action game with some minor simulation aspects, in which you are the pilot of an American F6F Hellcat plane. The setting of the game is the Pacific during World War II.

It is your job to defeat the Japanese by destroying enemy bunkers, machine gun nests and barracks on a series of islands. Barracks and gun nests can be bombarded with regular bombs, while you’ll have to use rockets to take out the concrete bunkers. After a successful bombing run, return to mow down the Japanese soldiers with your machine guns. You also have to sink Japanese battleships with torpedoes and engage in dogfights with enemy fighter planes.

You start each mission by taking off from an aircraft carrier, which you’ll have to protect from assaults by Japanese torpedo planes. Whenever you run out of fuel, bombs, rockets or machine gun ammo you can replenish those by returning to your carrier. Your carrier is also the place to repair damage to your plane.

The Gameboy Color version of Wings of Fury has a toned down violence level. You no longer mow down Japanese soldiers with your machine guns, instead you bombard jeeps & trucks. Also missing in this version are the Japanese torpedo planes and the small 1st-person view window. New are some extra manoeuvres for your plane like a barrel roll and a review of your ammo consumption after each mission. Using less ammo than allocated gives you bonus points.

You can play Wings of Fury online here, in web browser for free!