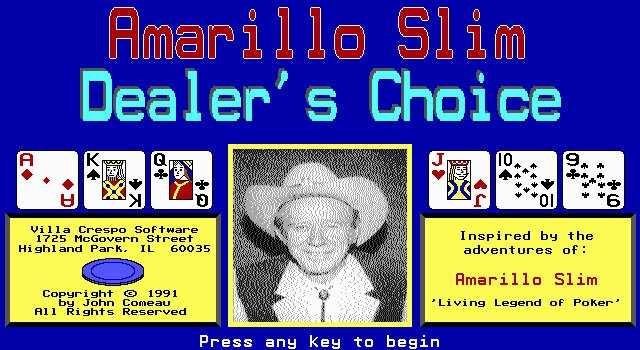 Remember playing your all-time favorite Amarillo Slim Dealer's Choice which was launched by Villa Crespo Software, Inc. in the year 1991? You can now play it online again here.

Full version more common edition of the "Amarillo Slim's 7 Card Stud", numbering – if you believe the cover – as much as twenty-eight types of gambling card games "poker".

Details about the appearance and gameplay of John Como and Villa Crespo Software, you can read on the description page abridged version, so will briefly mention only the main differences. Any reduced availability in addition to seven-card stud even six other versions of the game. In five-card stud instead of two closed and handed out five turns to open cards we get one closed plus one-two-three-four open; six-card stud is different, accordingly, the regime "one plus five"; Mexican stud like the previous one, six-card, but all cards are dealt "invisible" to others, and in between hands, each player must flip one of his two face-down cards to choose from. Draw poker is one of the most simple varieties: each player receives five cards and can exchange up to three of them on the other; the rapidly growing popularity of hold ' em after the game, no one does not give, but on the field there are five cards that are common to all (of them three open and two closed, but turn by turn, one after the other) – which are combined with your existing every two inaccessible eyes of other cards. Finally, in versions of "forty-four" the combinations consist of four private hole cards, and opening one of the four "common".

Ad number twenty-eight instead of seven are obtained by multiplying of the poker games available at four ways of scoring and determining winners. Instead of the usual "winner takes all" ("High") you can set the issuance amount from the common pot of the loser (that is, gathered the minimum of the available combinations, "Low") mode "High-Low" means the division of the prize equally between the two players with the highest and lowest number of points; but when "High-Spade" to get the best combination of cards will have to share the booty with those who have in hand the highest representative of the suit of spades. In a special section of the settings menu you can choose which options of the twenty-eight possible combinations of types of poker and ways to gain distribution can be used in a random order when you start a new round.

Of course, all the features and amenities of Amarillo Slim's 7 Card Stud" are present in "Amarillo Slim Dealer's Choice", from statistics to "tutor". So, this publication can advise to all fans of casino card games – especially the experts thoroughly studied the rules of poker and do not be alarmed of the diversity of available modes and varieties.