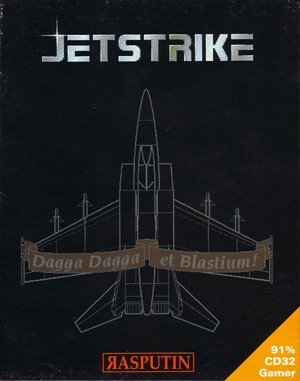 Click here to play Jetstrike online
5.0 /5
A side-scrolling flight simulator with a variety of mission types and over 100 planes to fly.

Jetstrike is an 2D side-scrolling action game like Brøderbund’s Wings of Fury. The great difference between these games is, in Jetstrike it’s possible to use 32 aircraft and 6 helicopters in several combat-missions or to be a part of the Aerolympics. Play Jetstrike online!

MIS, the FBI, NASA, the KGB, MOSSAD and even top secret agents from the North Beckinsdale Pigeon Fancier’s Association swung into action immediately. They were swiftly halted in their tracks when they received a top level order warning of a massive campaign of bribery of government officials in all countries. It appeared that any overt attempt to destroy SPUDD would result in the downfall of most of the world’s governments. SPUDD-controlled leaders would soon rise to replace them.

As the situation has worsened by the day, and SPUDD’s forces have grown from strength to strength, the various agencies have now put together an underground task force which they hope will combat the growing threat. This elite task force comprises one agent (yourself – nice of you to volunteer by the way), a highly trained mechanic called Harry, and a field support officer to assign missions. The plan is that you will “borrow” aircraft from local air forces and carry out secret strike missions on SPUDD forces while they are still small enough to have to stay hidden. Hopefully, by damaging their supply lines, factories and control centres, you should be able to ruin their plans of world domination. However, if you wreck too many expensive aircraft, your sponsors will not be able to cover for you, resulting in your sent back to the secret agent’s Basic Training School.

In Jetstrike you must stop the devious SPUDD forces by attacking them with your “borrowed” aircraft. Your Commanding Officer will give you a mission objective which you have to try to achieve without being shot down, blown up or crashing into mountains.

You can play Jetstrike online here, in web browser for free!