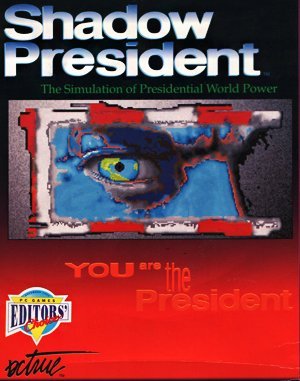 Click here to play Shadow President online
4.8 /5
A simulation game made for the PC, based on geopolitics.

You start the game but being elected as the new US President, your tasks take place in many issues like resolving crisis, avoiding wars in conflict zones, sending aids (military, technology and social for example) and having a good approval rating by the US population.

This game is one of the unique politics games ever made.

Shadow President allows you to become the president of the USA, starting June 1, 1990, in the aftermath of the fall of the Berlin Wall. Eastern European countries are getting independent, and Saddam Hussein is not the number 1 enemy of the US.

The game is very well documented, every country is presented with very good data and you can get a pretty accurate state of geopolitics of 1990. Shadow President is a captivating game if you manage to get into it. You have to put lots of efforts to make your strategies work. This can get quite frustrating, and that’s the main weakness of the game: it’s such a precise simulation it can get pretty annoying to play. A great game for geopolitics nerds!

You can play Shadow President online here, in web browser for free!