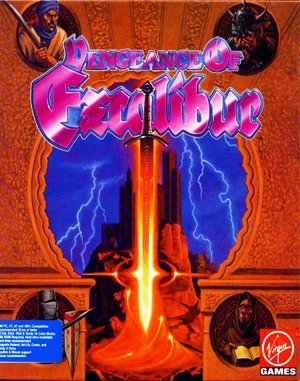 The demonic Shadowmaster, a dark summoning of the slain witch, is terrorizing Britain entrapping the King and stealing the fair court enchantress, Nineve. You must command the knights of the kingdom to find and destroy the vile beast.

The gameplay takes place in seven acts or episodes and features a mix of RPG and simple strategy game (for combat) elements. The game world itself is loosely based on medieval Spain, and features dozens of towns, cities, and castles. Traveling from location to location takes place on an overhead map, while each actual location consists of picturesque hand-painted backdrops depicting the type of environment it is set in. The interface is entirely mouse-driven (although keyboard short-cuts are also present), iconic, and streamlined to make it accessible to inexperienced game players.

You can play Vengeance of Excalibur online here, in web browser for free!

Jack in the Dark