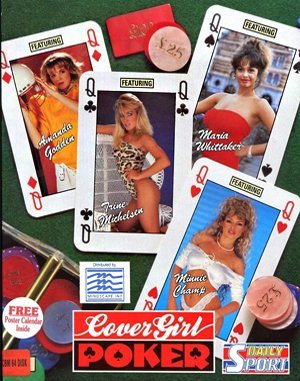 Click here to play Cover Girl Strip Poker online
4.3 /5
The aim of the game is to beat an opponent (choice of eight possibilities) in poker . Each bet is wagered of clothing and at the end, if the player wins the game, the opponent will be found naked. The player can choose from eight different opponents: Maria Whittaker , Amanda Godden, Ginny Champ, Donna Ewin, Trine Michelsen, Sofia Bratlund, Jane and Signe Andersen.

Yet another strip poker game. What is there to say about it?

Well, here you can play with up to three players against one of eight digitized women. Each time you make a girl lose all her money, she takes off some of her clothes (4 of the 8 girls feature “movies” of the strip, which consist of half a dozen frames).

At the beginning of the game, you may select your language at the beginning and can also choose to turn the girl’s comments on or off. Finally, the game features a zoom function with which you can get even bigger pixels.

Unlike many similar games Cover Girl Strip Poker shows animated sequences between one image and the other phases of the strip of the opposing player, although present in only four of the eight female protagonists. In reality this is not real movies, but of a series of sequential images.