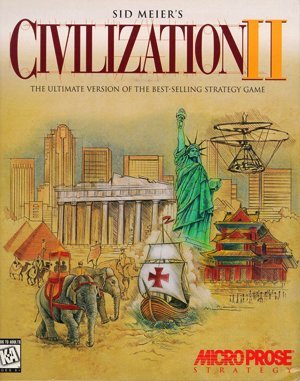 Sid Meier’s Civilization II is a PC turn based strategy game released in 1996. The game was met with critical and commercial success and is considered by many publications (such as IGN) to be one of the greatest games of all time. The object of the game is to create a civilization that can stand the test of time. Expand, conquer, trade and spread your culture around the world with the ultimate goal of either conquering all other nations or being the first nation to colonize another world. Play Sid Meier’s Civilization II online!

Although the title bears his name, Sid Meier actually had little to do with creating Civilization II. The game was designed by Brian Reynolds, Jeff Briggs and Douglas Caspian-Kaufman.

Starting out with just a single unit and knowledge of a small local area, your challenge is to guide your civilization into becoming the dominant force, either by conquering every other civilization or by sending a spaceship to Alpha Centauri.

As you’d imagine, a lot of challenges come into such a task. You must locate cities so as to make use of food, construction and trade resources, which can be later improved by constructing irrigation, roads, mines, railroads, and farmland. Each city can construct one item at a time – civilian and military units, buildings or Wonders of the World (there are 28 of these across the different eras of the game, and each can be possessed by only one city). The buildings and wonders have different effects – most buildings and some wonders improve defenses, scientific research, trade or food output, but most wonders offer unique advantages that can be used to great strategic effect.

There are over 100 scientific advancements in the game, and most require prerequisites before they can be researched. How quickly this happens depends on your scientific output, which must be traded off against financial and military concerns.

Combat can occur in cities or in the open terrain – things like forests and mountains give the defense an advantage. Unlike in the original Civilization, fights aren’t always won outright – most times the winning unit will be damaged, reducing its movement speed and attacking prowess until it’s repaired, but the losing unit always disappears from game. If multiple units are in a square that come sunder attack, the strongest unit fights – unless it is a city or Fortress, all units will be lost if the fight is lost. Once a city has no defensive units left, it can be captured. Certain units have the ability to cover all squares as fast as if they were roads, only a few can see submarines, and air units require re-fueling in a friendly city.

There are up to 6 other Civilizations in the game, and keeping good diplomatic relations with these is crucial. At times you may want to trade knowledge or pool military resources with a neighbor – at others they may want to destroy you. If you make deals and go back on them your reputation is affected.