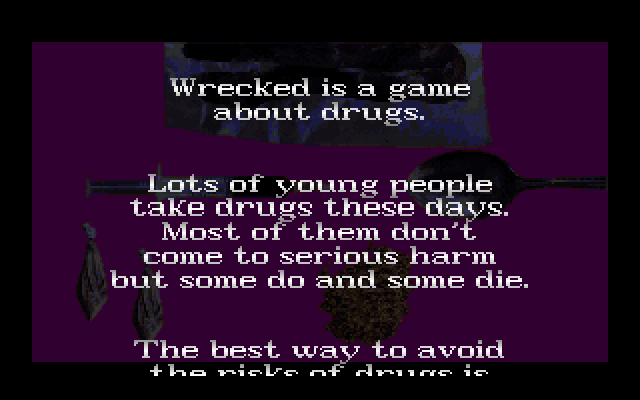 A Arcade game, Wrecked: A Psychedelic Adventure was released in 1993 by the famous developed Health Wise. It is a DOS game and is perfect for all video game lovers.

Rare and topics, and the availability of game released on a disk magazine PC Zone. Is a platformer with elements of a training game that tells about the dangers of drug use. The game was distributed on the model of Shareware. In the unregistered version is available one level.

A key feature is that when the declared anti-drug focus of the game, various psychoactive substances (from caffeine to heroin) perform in her role of power-UPS, and their use is necessary for the passing game. The use of some of them leads to a distortion of the screen, and others allow you to decrease, to penetrate the narrow passages. At the end of the game shows the total amount of money spent on drugs and prison sentence, which threaten the player if he tries to use the same substance in real life.

The training element of the game comes down to the ability to view information about psychoactive substances, select character, and quite strange for an anti-drug game read: so, about hallucinogenic mushrooms say that their use causes very pleasant sensations, and the negative side effects of amphetamines use are described as "fatigue and irritability" — practically the same is said about the caffeine.

The story itself is missing. The only level in the shareware-version is hell-demonic style. Control of the game is not too simple, when you jump to get in the right place is quite difficult. In fact, the only thing that may be of interest to this game is the contradictory nature of its subject matter.

Play your favorite childhood game Wrecked: A Psychedelic Adventure online in your browser for free here.