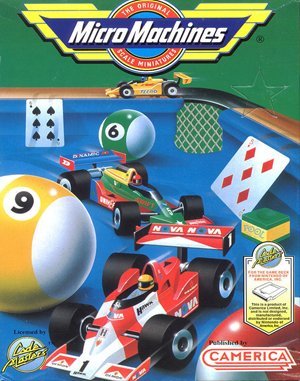 Click here to play Micro Machines online
5.0 /5
A top-down circuit style racing game based on the popular toy cars, featuring selectable characters and macro-sized courses based on areas of a suburban home.

Micro Machines is a circuit-type racing game with top-down graphics. Players select a character from a vast roster and race against CPU or human opponents; neither the races nor the cars the player finds himself in are related to the character. Play Micro Machines online!

Each character has a CPU strength rating but there are zero differences between them when played by human players.

If you’re bored of racing Formula 1 cars, rally cars or MotoGP bikes in their natural habitats, the Micro Machines series could be for you. It involves racing miniatures representing particular vehicle types across a particular terrain found around the house. The Sports Cars race on the desktop, 4x4s in the sandpit, Formula 1 cars on a snooker table, and so on.

These levels were packed with variation. The Snooker tables has the track painted on, although this is open to deviation (as are most levels), and had you racing through the pockets and across the rim of the table. Tanks raced as well, with the chance of shooting out your opponent if they got directly in front of you. The desktop levels include binders to jump across, pencil-sharpeners to avoid, and lots of visual jokes in the open homework.

Viewed from overhead with small graphics, the races include up to 4 cars. In one player challenge mode you race through the 21 tracks in a set order, selecting your 3 opponents as you go along (adding a fair amount of strategy – ideally you should aim to eliminate the better CPU cars early on), eliminating one after every third race (assuming that you can finish in the top 2 of a race within your 3 lives). If you win 3 races in a row without using a continue you get a time-trial race which can earn you an extra life.

The real innovation of the game was in the multiplayer modes. You started with 4 points each, and when one car gets far enough ahead to force the other car off-screen, the slider moves in their favour. Once it reached the end (which involved beating them 4 times more than they beat you) you win the level, although if 3 laps were completed, the person leading at that point is declared the winner – with a sudden death play off if scores are level. 9 of the tracks are available in this mode, although you can also play this Head to Head system as a 1-player game across all the tracks.

You can play Micro Machines online here, in web browser for free!