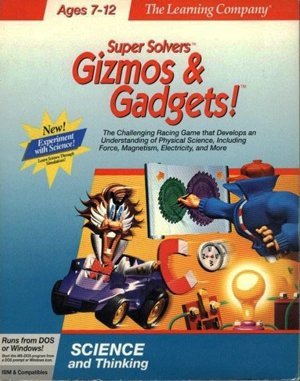 Click here to play Super Solvers: Gizmos & Gadgets! online
5.0 /5
A puzzle game aimed at children to teach them about science and technology.

The mischievous Morty Maxwell has taken over as the head scientist at the Shady Glen Technology Center. Players must try to reclaim the building by proving that they a better scientist than Monty.

Morty Maxwell, the Master of Mischief, has moved into the Shady Glen Technology Center and taken over as the head scientist! Your job is to accept Morty’s challenge and prove that you are a better scientist than he is. Morty has locked the doors in the warehouse with science puzzles. Show him how much you know about science by solving the puzzles. Then go through the doors, find the best vehicle parts, and build faster vehicles than Morty builds. To make your job more difficult, Morty’s sneaky Cyber Chimps are collecting vehicle parts, too.

Outsmart the Chimps by throwing bananas to them and making them take a nap. Race against Morty and win all 15 of the challenge races. You will reclaim the Technology Center and be the head scientist!

The game take place in a side-scrolling platforming environment, where players must unlock doors by solving puzzles. Morty has enlisted the help of Cyber Chimps, who are also collecting vehicle parts; players can throw bananas at the chimps to make them take a nap.

Solving puzzles gives access to vehicle parts, which are used to build a vehicle to race against Morty. Players compete in 15 races; if players win all of the races, they will reclaim the Technology Center and become the head scientist.