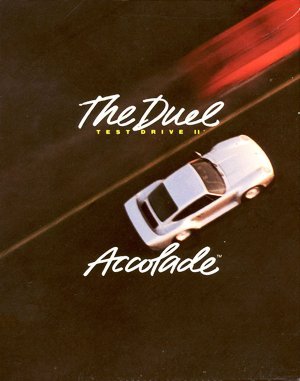 Click here to play The Duel: Test Drive II online
5.0 /5
A racing game that focuses on driving fast cars and realism. It is the sequel to the original Test Drive, and introduces new elements like a computer-controlled rival and varied scenery.

In the sequel to Test Drive, you can play against the time or the computer. Choose between a Ferrari F-40 and a Porsche 959, and take on your opponent, who is in the other car. There is also traffic to avoid. Play The Duel: Test Drive II online!

Each stage has a different setting, including forests and mountains, with a wide range of hazards to dodge. The game is designed to allow for scenario disks. To finish a stage, you must stop at the gas station by yourself, which allows you to refuel.

The game focuses on the same cockpit-view driving mechanics of the original, but adds more variation with the courses and a computer-controlled opponent vehicle. The goal is to reach the end of each course without getting caught by the police.